How I Rekindled My Love of Letter Writing 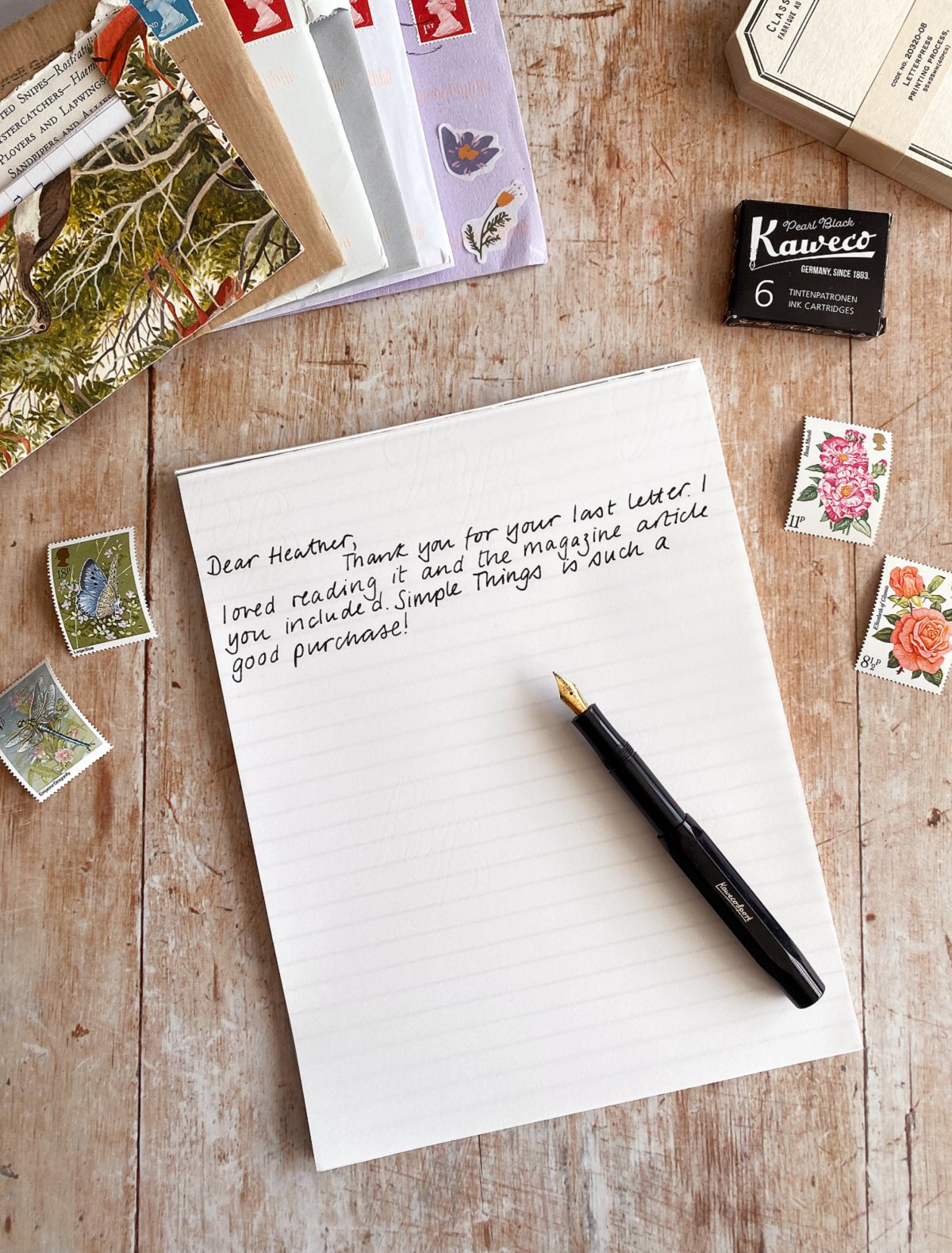 Since the end of last year, I’ve gained five pen pals and started writing multiple letters a month. In an overwhelming, fast-paced digital world, putting pen to paper has become one of my favourite ways to slow down. Here’s how I rekindled my love of letter writing…

Letter writing was a big part of my childhood. My mum had a handful of pen pals dotted around the globe. There was Cathy in America, Karin in Norway, and Alex and Jackie in Australia. The desk in her bedroom was often strewn with stationery and I have vivid memories of her writing letters while my sister and I attended swimming lessons and various other clubs. She would often start and stop the same letter multiple times, picking up wherever she left off at the next available opportunity. Obviously, I didn’t read what she wrote, but I’ve always imagined her letters were filled with the minutia of life as well as deeper thoughts and feelings.

Mum encouraged me to find pen pals of my own. I wrote to a girl called Julie for years, having met her on a family holiday somewhere in Yorkshire. It’s easy to forget how different the world was before social media. If we wanted to keep in touch, we had to exchange addresses and landline numbers instead of Instagram handles! I also wrote to my Gran’s elderly neighbour, Christian, for a long time. Her letters were lovely to receive – I wish I’d held on to them.

In my mid to late teens, email and text message became the preferred means of communication. It was the height of the Hotmail era when choosing a quirky email address became a teenage rite of passage. Some of my letter writing habits shifted online. When a friend I’d met in London one summer returned to university, we emailed regularly. My husband still has some of the emails we exchanged at the beginning of our relationship. But for the most part, the early 00s was when I stopped writing and sending letters on a regular basis.

At the height of the pandemic when the country was in lockdown, mum sent a constant stream of letters to me and the children. She wasn’t the only person who used snail mail to keep in touch during this time. A survey by the children’s charity Plan International UK found that more than two in five Britons had written letters during lockdown, citing its benefits for their mental wellbeing. The US Postal Service reported a similar increase.

Mindful Communication in a Digital Age

‘Letter-writing is a contemplative activity rather than a quick chore. You can type a text in a matter of seconds without paying attention. Sending letters, on the other hand, takes time and effort.’

Towards the end of last year, an old university friend asked me if I’d like to have a go at exchanging letters. After moving from Devon to Bristol almost 10 years ago, we’d been trying to keep in touch via Facebook Messenger. Despite our best efforts, communication had become increasingly sporadic. Life is busy and although instant communication is supposed to make things easier, we kept missing each other and forgetting to reply. Whenever we happened to be online at the same time, our conversations lacked depth because we were usually multi-tasking. Typing replies while we made dinner – that sort of thing. Although we were checking in fairly regularly, we didn’t really know what was going on in each other’s lives.

Writing to each other takes longer, but the whole process is more intentional. We must carve out time to reply and give each letter our full attention. In many ways, we’re communicating less than before, but I feel more connected to my friend than I have done in years. The conversations are deeper and more varied, and we both share more detail about our daily lives. For whatever reason, spending intentional time creating letters also leaves me with a greater sense of accomplishment than sending an email or text message.

Envelope art isn’t an essential part of exchanging letters, but if you’re looking for a new creative outlet, you may find it fun. I love using stickers, washi tape, rubber stamps and wax seals to prettify plain envelopes. I’ve also discovered a passion for philately. Most of my letters are sent using beautiful vintage postage stamps. To me, they’re like tiny works of art in their own right.

The beauty of this hobby is that it’s easy to get started. I think we all have someone in our lives we could write to. An old friend who’s moved away, an elderly relative or grown-up children who’ve flown the nest. If you’re keen to make new friends and fancy writing to someone you don’t know, there’s a huge letter writing community online and various ways you can get involved including Instagram accounts dedicated to matching people with pen pals. I was inundated with offers when I briefly posted a pen pal request on my Instagram Story, so that’s another simple way to find willing participants. Just be mindful about sharing your address with people you meet on the internet!

When you’ve found someone to write to, savour the process. I like to light a candle at my desk, listen to some music and use my best stationery. When I receive a letter in return, I read it over and over again. Knowing the author has taken time out of their busy day to pen a response always makes me want to give it my full attention.

The sneakiest of peeks from Izzy’s 18th. We aske

The obligatory 2022 highlight reel ✨ A bookish

It’s the most wonderful time of the year! Decemb

As a teenager in the 90s, everything I knew about